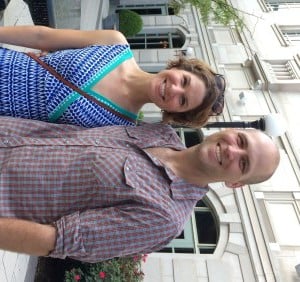 I wasn’t one of those girls who had been planning her wedding day since she was seven, but I knew what I wanted. At our age, Pete and I had been to enough weddings to know what we liked and didn’t, and of the two of us, I’m the type-A, agenda-toting list-maker. I like a plan. Aside from 90-degree weather, our wedding day, October 5, 2013, went pretty much according to plan.

Three weeks later Pete was diagnosed with Hodgkins lymphoma. That was not part of the plan. An overwhelming outpouring of love — presents, cards, happy thoughts — came our way, and most of it, rightfully so, was directed at my brand-new hubby. As the dutiful new wife, I became his note-taker at doctor’s appointments, his short-order cook when chemo meant nothing tasted good, his cheerleader when he felt strong enough to stand up, and his therapist when he was frustrated. I became his caregiver, his rock.

The first question out of concerned friends’ mouths was “How’s Pete?” At first, I was happy to provide updates on his surgeries and the plan for chemo. I would nod sympathetically when stories of “My aunt had cancer and what really helped her was…” were told. But slowly, I became resentful. Their well-meaning advice implied that whatever the doctors at Vanderbilt were doing, it wasn’t enough. If I could just get Pete to consume enough almonds or kale or yoghurt or…, somehow I could cure his cancer. Yes, in an ideal world, I’d be able to cook every meal with organic vegetables, massage his neuropathic feet with aromatic oils, and go with him to every doctor’s appointment. But in reality, the revised “plan” was to come home from work early enough to walk the dog and get a bowl of plain pasta ready for my chemo-drained husband who hadn’t been able to leave the couch all day, much less empty the dishwasher. I grew frustrated and angry and even a little bit jealous. Yes — I was jealous of my husband’s cancer. I’d catch myself and feel guilty and horrified. What was wrong with me? I wasn’t the one who was sick. I was healthy and I should be grateful. Right?

I reached out and found Gilda’s Club. The moment I walked through that red door I felt my shoulders relax. When I sat down in group, I didn’t receive looks of pity, but of understanding. They got it. And they wanted to know how I was doing behind my practiced smile and non-committal “he’s okay, thanks for asking.”

I don’t know how I would have survived those 12 months if not for that Friends and Family group. It was my steam valve. A place where I could ask questions like “How do I deal with my husband puking in the middle of the night?” (Don’t buy wicker wastebaskets for the bathroom) or “He’s strong enough to start a project, but then he has to take a 4-hour nap. Do I finish it?” (Nope). And, most importantly: “Can I fight this battle for him?” (As much as you’d like to, no).

The strength I drew from Gilda’s enabled me to be stronger for Pete, and for that I am so grateful. Pete’s latest scans are all clear and I’ve given up my spot in group for someone who is going through now what I went through then. I still recite the Serenity Prayer – our group closing tradition – when I feel overwhelmed. I take a deep breath and I inhale serenity, courage, and wisdom. I exhale expectations. Plans change and you learn to roll with it. That is what I learned inside the red door.